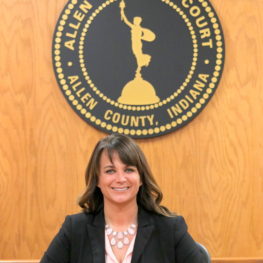 Judge Trevino grew up in Fort Wayne, Indiana, where she graduated from South Side High School. She is a 1999 graduate of Saint Joseph’s College, and in 2003, she received her J.D. from the Indiana University School of Law (now the Maurer School of Law).

Prior to becoming a Magistrate, Judge Trevino practiced law for approximately 10 years. During that time, her practice was primarily concentrated in the areas of family law, civil litigation, and appellate work. Judge has experience arguing cases in various trial courts around the State, and was also chosen to present oral arguments to both the Indiana Court of Appeals and the Indiana Supreme Court. She also served as Guardian Ad Litem for children involved in custody or parenting time disputes.

Before joining the judiciary, Judge Trevino regularly volunteered for Legal Line, a program sponsored by the Allen County Bar Association that provides free legal advice to callers in need. She also dedicated time to local youths, serving as a soccer coach for the Fort Wayne Sport Club, and as a cheerleading and soccer coach for students at South Side High School and Canterbury Middle School. Judge Trevino is a past President and Board Member of the South Side Alumni Association, and also served on the South Side Foundation, where she dedicated her efforts to granting scholarships to deserving students. In 2014, The Greater Fort Wayne Business Weekly named her to its “Top Forty Under 40,” an honor bestowed upon individuals younger than 40 who are making a difference in northeast Indiana both on the job and in the community.

Judge Trevino serves on the Board of the Indiana Chapter of the Association of Family & Conciliation Courts for which she previously served as Chair of the Education Committee and now serves on the Finance Committee. In 2016, the Indiana Supreme Court appointed her to its Alternative Dispute Resolution Committee. Judge Trevino regularly serves as a lecturer on topics in the area of domestic relations. She was chosen to participate in the National Judicial College’s Faculty Development Program aimed to train presenters/lecturers for the statewide and/or national judicial conferences. Locally, Judge Trevino is a Member of the Allen County Bar Association’s Family Law Executive Committee, and she also serves on the Board of Directors of the Allen County Bar Foundation, Inc.