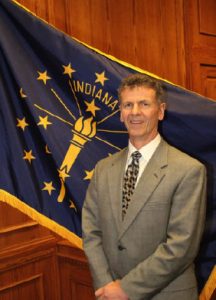 MAGISTRATE DANIEL G. PAPPAS was appointed Magistrate of the Allen Superior Court in November, 2013. Prior to his appointment, Dan was a trial lawyer who primarily practiced in the areas of family, criminal defense, and personal injury law.

He was active in the Allen County and DeKalb County Bar Associations, having served as a Board member of the Allen County Bar Association, and also on the Grievance and Fee Dispute Committees of that association. He is the past Board President of his neighborhood association, and has served on the Board of SAFY (Specialized Alternatives for Families and Youth) of America, a non-profit therapeutic foster care agency, as well as on SAFY’s Indiana Board. He also served on the Board of the Court Appointed Special Advocate (CASA) organization, whose representatives’ advocate for the needs of children in the community.